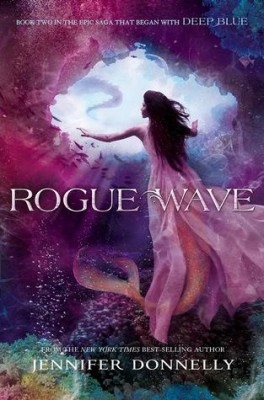 Rogue Wave, book two of the WaterFire saga, is filled with heart pounding action, jarring twists and turns, and shocking reveals. Rogue Wave takes place in the magical underwater world of the merpeople.

Point of View
This book is told in third-person, alternating between Serafina’s and Neela’s points of view.

Setting
This book takes place in the waters of the modern earth.

Serafina (Sera): 16 year old heir to the throne of Miromara

Mahdi: Prince and heir to the throne of Matali

Ling: Teenage mermaid from the realm of Qin; she is an omnivoxo (she can speak all languages)

Lucia Volnero: Teenage mermaid who used to be one of Sera’s ladies in waiting

Kora: The mermaid ruler of the Matalin region of Kandina

Bloodbind: A dark spell in which blood from different mages is intertwined and forms a bond only breakable by death; it allows the mages to share abilities with each other; Serafina and her friends performed one.

Vitrina: Souls of vain humans that have been trapped in mirrors

What happened in Rogue Wave?

The book begins with Serafina in Vadus, the mirror realm. She is trying to find a mirror that will take her to the ruins of Atlantis, without running into Rorrim Droll, the lord of Vadus. Sera is not successful. Rorrim finds her and begins to feed on her fear. She outsmarts Rorrim, and he releases his hold on her. Sera then finds a silverfish, just as Baba Vrăja had advised. Because of the bloodbind, Sera now has some of Ling’s ability of language, and she can speak to it. The silverfish leads Sera to a mirror that will take her to Atlantis.

Once in Atlantis, Serafina meets up with Ling. The two girls find Thalia, a vitrina, in a mirror that used to be in the washroom of Atlantis. Thalia was around during Atlantis’s destruction, and she knows what all of the six talismans (of the six rulers of Atlantis) are. Thalia tells the mermaids that Orfeo’s talisman was a black pearl, Merrow’s was a tear shaped diamond, and Navi’s was a silvery blue moonstone. Before Thalia has a chance to tell the girls any more, Sera and Ling find themselves surrounded by Opafago (cannibalistic sea creatures that surround the ruins of Atlantis). The mermaids are forced to destroy Thalia’s mirror because standing in it are Rorrim and a man with no eyes. Sera and Ling, now unable to escape from the mirror, must face the Opafago.

Sera and Ling narrowly escape the Opafago, and they leave the ruins of Atlantis. The girls spend the night in a nearby cave, and then they split up once again. Ling heads home to Qin hoping for advice from her grandmother. Sera plans on going home as well, but she is afraid of what she’ll find. Meanwhile, Neela returns home to Matali and tells her parents everything she’s been through. Everyone thinks she’s crazy, and her parents have her locked in her room.

When Sera arrives in Cerulea, she finds Traho’s death riders all over the city. Sera stays hidden and finds the Ostrokon (conch library). She has hopes of finding conchs on Merrow’s Progress (the journey Merrow took around the mer realms). Sera believes this was when Merrow hid the talismans. When Sera is right outside the Ostrokon, she hears voices of death riders. She is shocked when she recognizes one of the death riders as Mahdi. As soon as the death riders are out of sight, Sera rushes to Cerulea’s nearest safe house.

Mahdi enters the safe house and finds Serafina. He tells her that he is not loyal to Traho, but he is acting as a spy. Sera figures out Mahdi was Blu (and Yazeed was Grigrio), the merman who rescued her from Traho and brought her to Duca Armando (who is now dead). Mahdi hadn’t really been a partier but rather one of the Duca’s warriors.

That night, Traho attacks the safe house. Most of the merpeople take a secret passage to the next fortress, but Sera goes back to rescue a mermaid and her small daughter. Sera is pursued by death riders, but she escapes. She swims as fast as she can to the Ostrokon, and there she finds a place to hide.

Sera is discovered by a group of seven merpeople who call themselves the Black Fin resistance. They have been causing Traho quite a lot of trouble. These merpeople (among whom is Coco, a mermaid of about 12 years) inform Sera that Traho has stolen all of the conchs on Merrow’s progress. Coco, however, knows he missed some. Sera finds the conchs and listens to every one of them. She is about to give up, but her last conch has just what she needs. Sera finds out one talisman has been hidden in each of the six mer realms. Merrow’s talisman is in a shipwreck off the coast of Spain. Sera sends a conch explaining this to Neela, and then starts off for the shipwreck.

Neela escapes from her locked room and heads to the home of a mermaid named Kora, who she hopes can help her. Having received Sera’s conch, Neela knows that Navi’s talisman is somewhere in Matali’s dragon breeding grounds. While on her way to find Kora, Neela comes across a prison camp that Traho has started. Captive merpeople are being forced to search for the talisman.

Sera reaches the shipwreck and finds that it’s being guarded by a ghost infanta of Spain. The only way Sera can get the talisman is by freeing the ghost, and the touch of a ghost is hard to survive.

Neela reaches Kora’s home, and Kora agrees to help her. Together, Neela, Kora, and Kora’s troops find the talisman and rescue the merpeople from Traho’s prison camp.

Sera frees the ghost and gains possession of Merrow’s talisman. Sera is weak after freeing the ghost, and Mahdi rescues her. They find a safe house near the wreck, so Sera can have some rest. There Sera and Mahdi decide to say their betrothal vows.

Neela returns to Matali and finds it has been taken and is now filled with death riders. She finds her lost brother, Yazeed. He knows who Traho’s boss is. She is Portia Volnero, the woman who once loved Sera’s uncle, Vallerio.

How did Rogue Wave end?

Sera hears that her uncle Vallerio is returning to take Cerulea back from Traho. She thinks Vallerio is going to help her and give her back her place as princess, but she is wrong. Sera finds out Vallerio secretly married Portia Volnero, and they have a daughter Sera’s age. Their daughter is Lucia, Sera’s old enemy. Lucia is given a Dokimí and is promised to marry Mahdi. This will not work, though, because Sera and Mahdi have already said their betrothal vows, which will make Lucia’s void. Sera finds out Vallerio wants her dead and wants Lucia to rule. Vallerio and Portia have also been talking about a man who paid Traho. They do not say who he is.

Sera meets up with Neela, Yazeed, and the Black Fins. They are finally reunited. The group is hiding, when they happen to come across the graves of Sera’s parents. With tears in her eyes, Sera remembers what a great ruler her mother had been and that the secret to being a good ruler is love.

The man with no eyes holds Ling captive on his boat. He is wearing Orfeo’s talisman. His name is Rafe Iaoro Mfeme. In front of Ling, he rearranges the letters of his name. They spell out the words: “I am Orfeo fear me.”

There you go! That’s what happened in Rogue Wave, book two in the WaterFire Saga!

One thought on “What happened in Rogue Wave? (WaterFire Saga #2)”