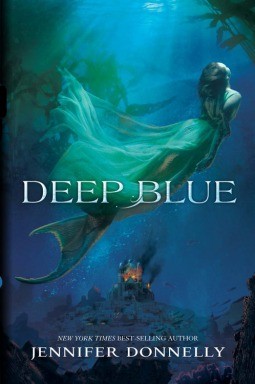 The WaterFire Saga takes place underwater in the world of the merpeople. This series is filled with magic (merpeople cast spells by singing; usually the more powerful the voice, the better the magic), mythology, and adventure.

Point of View
This book is told in third-person from the main character, Serafina’s, view.

Setting
This series begins in Sera’s kingdom of Miromara, then expands into the waters of the modern earth.

Serafina (Sera): 16 year old mermaid; princess and heir to the throne of Miromara; she is soon to be betrothed to prince Mahdi of Matali; she is descended from Merrow

Neela: Sera’s best friend and Mahdi’s cousin; “One whose heart will hold the light”; descended from Navi

Mahdi: Prince of Matali; soon to be betrothed to Sera

Ling: Teenage mermaid from the realm of Qin; she can speak all languages; “One who sings all creatures songs”; she is descended from Sycorax

Becca: Teenage mermaid from Atlantica; “One with spirit sure and strong”; descended from Pyrrah

Ava: Teenage mermaid from the Amazon River; she is blind but is able to sense things; she relies on Baby, her guide piranha, to get around; “One possessed of a prophet’s sight”; descended from Nyx

Astrid: Teenage princess of Ondalina; “One who does not yet believe, Thus has no choice but to deceive”; she is descended from Orfeo

Merrow: One of the six rulers of Atlantis; first ruler of merpeople; Sera is descended from her

Baba Vrăja: The leader of the Iele (river witches)

Bloodbind: A dark spell in which blood from different mages is intertwined and forms a bond only breakable by death; it allows the mages to share abilities with each other

What happened in Deep Blue?

Backstory ~ Centuries before the events of Deep Blue take place, there was a great island city called Atlantis. Atlantis was ruled by six powerful mages: Merrow, Orfeo, Sycorax, Navi, Pyrrah, and Nyx. Orfeo betrayed the other mages and Atlantis itself. He created the dangerously powerful monster, Abbadon. Abbadon destroyed Atlantis, and the whole island went into the sea. Abbadon was eventually defeated and caged in the waters of Antarctica; he could not be killed. Merrow called on Neria, the goddess of the sea to give tails and fins to the remaining people of Atlantis. This saved them, as they were then able to live in water. Merrow founded Miromara and became the first ruler of the merpeople. Over time, the merpeople spread out, formed other kingdoms, and grew to populate the waters of the world.

Deep Blue opens with a dream of the main character, Sera. In Sera’s dream, the witches of the river Olt (the Iele) are in a circle around waterfire. They are chanting. There appears to be something in the waterfire. The waterfire blazes higher, then goes out. Whatever was in it is now gone. Only the oldest witch remains, and she continues to chant.

Sera wakes to her mother, Isabella, queen of Miromara. Sera is reminded of her upcoming Dokimí, the ceremony in which she will prove herself to be descended from Merrow, make her betrothal vows to Mahdi, and promise to rule Miromara faithfully when she comes of age. Sera is nervous to become engaged to Mahdi; she has heard he is no longer the shy, awkward boy he was when she last saw him. She has heard he has become a party boy.

Mahdi, his cousins Neela and Yazeed, and his parents, the rulers of Matali, soon arrive in Miromara to attend Sera’s Dokimí. Sera is very excited to see Neela, her best friend. Neela, however, does not come with good news. Mahdi has indeed changed and become as the rumors say. Sera is upset, so she rushes to her mother’s study. Sera finds Isabella to be in a conference, and Sera’s uncle, Vallerio, is among those in the room. Sera decides to stay out of sight and not talk to her mother after all. She does hear part of the conference though. Yet another Miromaran village has been raided; it appears that the kingdom of Ondalina is to blame.

The day of Sera’s Dokimí rapidly approaches. Sera is confirmed to be a true daughter of Merrow. She is fit to be the next ruler of Miromara when she comes of age. It is at Sera’s Dokimí that disaster strikes. An assassin shoots Queen Isabella in the chest with a poisoned arrow. He aims to strike again, but Sera’s father, Bastiaan, steps up to block the attack. He is killed instantly. Hundreds of soldiers flood the royal city, Cerulea, and the scene erupts into chaos.

Sera and Neela try to get themselves and the very wounded Isabella to safety. They are unable to. Sera and Neela are forced to flee, and they know the soldiers, who are all wearing the uniforms of Ondalina, will be after them. Sera does not know if anyone else escaped from Cerulea. She does not even know the fate of her mother.

Sera and Neela head towards the safe fortress town of Tsarno. On their way, they meet Zeno Piscor, a merman who tells them of a nearby cave in which they can rest. The girls mean only to stay for a few minutes, but they fall asleep. Sera wakes to find herself captured. She and Neela are taken by the men in the uniforms of Ondalina. A man named Traho begins to question Sera about being summoned by the Iele. He quotes the lines from Sera’s dream. Traho also holds Thalassa, the keeper of Miromara’s magic (and Sera’s old teacher), captive. Sera gives Traho false information and is put in chains and into a tent with Neela and Thalassa. There Neela confirms that she had the same dream as Sera. They have both been summoned by the Iele and must find the river witches in the Olt River.

The three mermaids are rescued by mermen named Grigio, Blu, and Verde. Traho realizes the mermaids are gone and is right behind them. Thalassa stays behind and uses the rest of her magic to give the others a chance to escape. Sera and Neela are taken to the home of the human (terragogg), Duca Armando. He informs them that the human Rafe Iaoro Mfeme was partly responsible for the attack on Cerulea.

That night, the girls are taken to rooms, but Traho and his men soon arrive. Sera and Neela only narrowly escape. They swim through the mirror in their quarters. From the mirror, the girls travel to Radneva, in the Black Sea. It is a three day journey from there to the river Olt. In Radneva, Sera and Neela meet up with Ling, another girl who was summoned.

The three mermaids reach the Olt, and on the way meet up with two other girls who have been summoned, Becca and Ava. The five mermaids find the fortress of the Iele, and together ready themselves for what is to come.

How did Deep Blue end?

Sera, Neela, Becca, Ling, and Ava meet Astrid, the final of the summoned. The six mermaids are then approached by Baba Vrăja, the leader of the Iele. She takes them into a room in which Abbadon has emerged. He has broken through the witches’ spying spell and is actually in the room. The six girls manage to fight Abbadon and keep it behind the waterfire.

The mermaids learn that they are the descendants of the six rulers of Atlantis, and they have the ability to one day defeat Abbadon. They must find the talismans that once belonged to Merrow, in order to defeat the beast. The girls and the witches do not know where, or even what, the talismans are. Astrid does not believe any of this. After telling Sera that Ondalina was not behind the attack of Cerulea, she leaves the Iele.

Abbadon listens to the conversations of the witches and the mermaids, and the beast gives all of the information it hears to its new master Traho. Traho locates the Iele and, along with many soldiers called death riders, he heads toward the Iele as fast as he can. He thinks the five mermaids: Sera, Neela, Ling, Becca, and Ava are only children and will never be capable of defeating Abbadon.

When Sera is told to came to Baba Vrăja, so that she and her friends can get to safety, she does not listen. Instead, Sera leads the others into the room containing Abbadon. The five mermaids do a bloodbind spell, and Sera knows Abbadon will tell Traho. She wants Traho to know that they are serious about defeating Abbadon and that they are not as weak as he thinks.

Traho then bursts into the room. All five mermaids are forced to leave Baba Vrăja in order to escape. They leave through a mirror in the room, not even knowing where they will come out. Once the girls are all in, Baba Vrăja breaks the glass of the mirror to prevent Traho and his men from entering.

There you go! That’s what happened in Deep Blue, the first book in this series!

18 thoughts on “What happened in Deep Blue? (WaterFire Saga #1)”