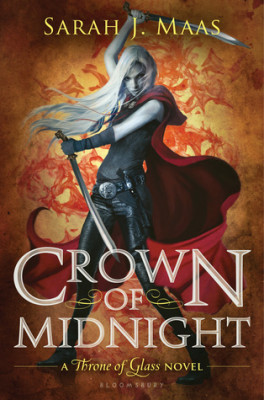 This second book was really great, even better than the first one! Here’s a quick tour of what happened in Crown of Midnight. We’ve got your spoilers here so you’ll be ready when the next book comes out!

Ratings
4.8 stars on Amazon
4.55 stars on Goodreads
Add Crown of Midnight at Goodreads

Point of View
The book is written in third person from a variety of points of view, including Celaena (predominantly), Chaol, Dorian, and occasionally some other minor characters.

Main Characters
– Celaena Sardothien is a former assassin who now serves as the King’s Champion after winning the competition in book 1.

– Dorian Havilliard is the crown prince and is nothing like his evil father, the king of Adarlan.

– Chaol Westfall is the king’s captain of the guard, Dorian’s friend, and Celaena’s love interest.

– Nehemia Ytger is a princess from Eyllwe and is staying at the castle in Adarlan to learn about their culture and customs.

– Archer Finn is an old friend of Celaena’s from her assassin training days; he now works as a high-end, much sought-after courtesan.

What happens in Crown of Midnight?

Celaena is fulfilling her new role as King’s Champion by performing the assassinations he orders on his enemies, or so it seems. She knows most of the king’s enemies are “the good guys,” so she is faking their deaths and helping them sneak out of Adarlan. Celaena is given the name of a suspected rebel leader, Archer Finn, as her next target and has one month to complete the task. His rebel movement is trying to track down the lost princess Aelin Galathynius, the heir of Terrasen and the only hope to restore the honorable kingdom to its former glory.

Celaena’s relationship with Chaol continues to blossom in this book; their friendship and attraction is growing. Chaol feels like his loyalty to the king and to Dorian means he can’t have a relationship with Celaena. But all the walls between them come down when Celaena surprises him with a romantic birthday dinner. They solidify their relationship that night, and they are very happy for a short amount of time. Then Chaol is kidnapped, and his captors send a ransom note to Celaena.

Did you know that there is a lot of artwork out there for The Throne of Glass series? We created a Pinterest page to store some of it. You should go check it out and follow us!

When Celaena arrives to rescue Chaol, she discovers Archer is behind the capture. Archer’s says they kidnapped Chaol because they thought he was set to question Nehemia about her involvement in the rebel movement. He says he has been working with Nehemia to assemble a rebel force to challenge the king. Archer says they now realize that it’s the king who will question Nehemia very soon, and he thinks they will torture and maybe even kill her. He says Chaol knew this might happen and could have prevented it. Celaena believes this even though it is only partially true.

Celaena frees Chaol and then rushes back to the castle to try to save Nehemia. She discovers Nehemia brutally murdered in her bedroom. Celaena blames Chaol for her death since he knew her life had been threatened and didn’t do enough to stop it. She attacks Chaol and almost kills him, but Dorian reveals his latent magical powers as he is able to literally freeze Celaena’s attack and thus save Chaol’s life. Chaol sends Celaena to the castle dungeons because she is so out of control, but he can’t bring himself to leave her there for long.

Celaena’s goal becomes finding and killing Nehemia’s murderer. She thinks it might be Grave, a man she competed against to become the King’s Champion. So she tracks him down and kills him. But she is wrong about who the true murderer is.

Celaena meets a witch who is working at a carnival that has come to the castle grounds. Celaena goes to the woman to get help deciphering a riddle tied to the magic Wyrdmarks she has been investigating. The witch says the riddle describes the three Wyrdkeys necessary to open the Wyrdgate. She says the person who finds the keys and opens the gate will wield incredible power, enough to control this world and others. The witch then attacks her, and Celaena ultimately kills her.

Celaena finally figures out the full riddle, and it leads to where one of the three Wyrdkeys was hidden. But it’s gone, and Mort, the magic doorknocker, confirms her fear…the king discovered it long ago. Celaena suspects the king has the second key as well and knows she has to find the third one before he does. She thinks Nehemia was researching this before her death and might know the location of the final key. Celaena decides to open a portal to the other worlds to try to reach her.

Celaena reaches Nehemia, and she tells Celaena her death was necessary to set things in motion to defeat the king. Archer arrives just as Nehemia disappears. He explains that Nehemia left his rebel group a week before her death because she didn’t agree with the tactics he wanted to use to bring down the king. So he killed her and set it up to make sure Celaena turned against Chaol in the process. Celaena acts likes she’s going along with his plan to get the information she needs and then attacks Archer. A creature steps through the still-open portal as they fight, and Chaol and Dorian (who were alerted by a dream Dorian had) arrive as it emerges.

Celaena’s dog chases the creature into the portal. Chaol goes in to save the dog, and Celaena follows close behind to save them both. He sees her true Fae form in this land they travel to because it’s one where magic still exists. They manage to escape back to their world, where Celaena’s Fae form vanishes, and they close the portal. Celaena kills Archer shortly thereafter.

How did Crown of Midnight end?

Chaol decides the safest place for Celaena is away from the king and Adarlan. He goes to his father, who has been at the castle counseling the king, and works out a deal. He says he wants to send Celaena to the rival country of Wendlyn to dispatch the royal family and learn about their military plans. In exchange for his father’s help and vote in the matter when it’s brought before the king, Chaol says he will leave his position as captain of the guard and return home to Anielle, as his father has wanted for so long. The king ultimately agrees to this plan.

On the docks before her ship sails to Wendlyn, Celaena tells Chaol the full truth about everything…about the Wyrdkeys, the creature she and Dorian killed in the tomb beneath the library, and how the king has some bigger, evil plan that she still doesn’t fully understand. And then she tells him a riddle about the last truth of all. He figures it out fairly quickly after she is gone…Celaena is the lost princess of Terrasen, Aelin Galathynius.

There you go! That’s what happened in Crown of Midnight, the second book in the Throne of Glass series.

Ready to read the other Throne of Glass books? Click to buy and help us pay for hosting!

13 thoughts on “What happened in Crown of Midnight? (Throne of Glass #2)”