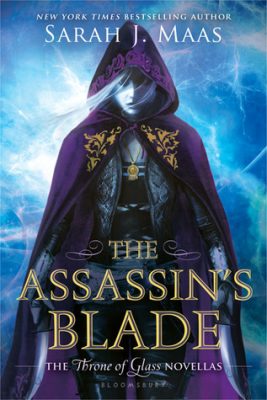 These novellas provide so much insight into Celaena’s earlier life spent as Arobynn’s best assassin. I enjoyed seeing the details of this part of her journey, which has only been briefly referenced in other Throne of Glass books. It was especially fun learning all about her first love, Sam!

Ratings
4.7 stars on Amazon
4.5 stars on Goodreads
Add The Assassin’s Blade at Goodreads

Point of View
The book is written in third person from a variety of points of view, predominantly Celaena’s.

Setting
This book is set in the fictional lands of Skull’s Bay in pirate territory, a port town called Innish, the Mute Master’s compound in the desert near Xandria, and in the city of Rifthold in Adarlan.

I give it 4.25 stars overall.
Lets be friends on Goodreads:

Main Characters
– Celaena Sardothien – the best assassin in Arobynn’s league and his favorite; she is ruthless and cocky
– Sam Cortland – the second best assassin in Arobynn’s league who has always taken a back seat to Celaena despite his impressive skills; he has been secretly in love with Celaena for years
– Arobynn Hamel – the head of the league of assassins and Celaena’s trainer and employer

What happens in The Assassin’s Blade?

The Assassin and the Pirate Lord
Arobynn calls a meeting to inform his assassins that Ben has been murdered. Not long after this announcement, Celaena and Sam are sent on a secret mission to Skull’s Bay in pirate territory. They don’t know the reason they’re going until they get there. Arobynn is buying slaves from the pirate lord Captain Rolfe. He wants Celaena and Sam to transport them back to Rifthold. Celaena is appalled and decides to break up the deal. She plans on her own for a little while, but Sam knows she’s up to something. He finally drags it out of her and agrees to help. The plans go somewhat awry, and for a while Celaena even thinks Sam has died doing his part. But they disrupt the plan, and the slaves sail away to their freedom. Celaena and Sam start off as adversaries but end up being reluctant friends by the end of this adventure together.

The Assassin and the Healer
Arobynn is making Celaena stay in a dingy port town called Innish after the fiasco she pulled in Skull’s Bay. He beat her for it, but that wasn’t enough, in his opinion. She is staying at an awful inn/tavern called White Pig’s Inn. The barmaid, Yrene Towers, watches Celaena closely as she sits and drinks quietly, hood drawn, for two days straight. Yrene is a smart girl who grew up in a family of healers who were killed by the king of Adarlan. She has been on her own since then. She is trying to save enough money from this job to journey to Antica to train at a school for healers. When Yrene takes the trash out after the bar closes that night, four men attack her. Celaena saves her life and then teaches her how to fight. Before Celaena leaves on a ship the next morning, she leaves a pouch of gold in Yrene’s room so she can go follow her dream.

The Assassin and the Desert
Arobynn commands Celaena to earn a letter from the Mute Master, the leader of a famous troop of assassins, in one month’s time. The Mute Master approves her for training, and she gets assigned a roommate named Ansel, a fellow female assassin. Celaena desperately wants an audience with the Master, but that is not allowed until he sees fit. So she has to endure normal assassin training at the compound.

One day she accompanies Ansel on an errand assigned by the Master, but she is left in the Xandria marketplace while Ansel tries to negotiate for peace. Ansel admits she’s actually training for revenge on a man named Lord Loch, who captured her home and country and killed her family.

Celaena is surprised the Master would like to begin training her each evening at sunset. Ansel is jealous and the girls argue. The next day, they both apologize. Ansel has wine, and they toast. But she has poisoned Celaena’s. Celaena awakes alone in the middle of the desert with a note that says the Master wanted her gone without shaming her. She rides to Xandria to search for a ship to travel home on. She sees a large troop of Berick’s men marching toward the assassin compound. Celaena rides back, and many are dead in the attack.

Ansel has poisoned the Master with a temporary paralytic drug. She was a spy for Berick so he will defeat those who killed her family. Ansel sees Celaena as a true friend and asks her to join her. Celaena is tempted but refuses. They fight. Celaena finally gets the upper hand but decides to let her live.

The Master gives Celaena the letter of recommendation and chests full of gold to pay off her debts to Arobynn. He tells her she always has a home there if she ever chooses to leave the north. He says he thinks his son Ilias would be pleased if she chooses to return some day.

The Assassin and the Underworld
Celaena intends to pay off Arobynn. She has already purchased an apartment. When she arrives at the Keep, Arobynn is very apologetic. He showers her with gifts, including an impressive and expensive new armor. He asks her to take on their new high profile client, a wealthy woman who wants her ex-husband assassinated. Celaena agrees and lets Sam help when he asks to.

At a party, a group of men show up wearing masquerade outfits. These men are clearly Dorian and Chaol. Dorian and Celaena lock eyes from across the room and flirt for a while before Sam comes over.

Celaena pays off her debt to Arobynn the next morning. She says she still wants to work with him, though. During some surveillance, she is discovered and taken to the city sewers to die when they’re flooded. Sam rescues her at the last moment. She kills the ex-husband and discovers he was the good guy. But the deed is already done, and afterward Celaena decides to tell Arobynn about moving out. She sells her Asterion horse to buy Sam’s freedom. Sam tells her he’s been in love with her for a long time, and she realizes she has similar feelings for him.

How did The Assassin’s Blade end?

The Assassin and the Empire
Celaena sneaks into the Royal Theater to watch the symphony. She watches from the rafters and sees Arobynn has brought Lysandra with him this year. She leaves early but discovers Sam’s not home. Celaena’s mad because she assumes he’s fighting at the Vaults to win money. They argue. He says they need money; Celaena doesn’t want him to earn it that way. Sam wants to move away.

They go to Arobynn’s house to tell him they’re leaving. She offers to pay their way out of the Guild, and Arobynn counteroffers asking for an insane amount of money. She agrees. They need a big contract to have enough money to leave. Sam finds one…a nearly impossible kill, local Crime Lord Jayne and his ruthless right-hand man Farran. Celaena reluctantly agrees to help. They decide to take Farran out first, and Sam wants to make this kill. They argue, but eventually Celaena gives in.

One night, Celaena finds Arobynn in her living room. He tells her he knows who they’re trying to take out. He says it’s a dumb move. He tells her he loves her and asks her to stay in Rifthold with him. She refuses.

As they plot this kill, Sam books passage to the southern continent for them. He decided to do this after seeing Arobynn, who told him to ask Celaena about her life before Rifthold.

Celaena is restless and watching the clock while waiting for Sam to get home from the Farran kill. She heads out to look for him but doesn’t find him. She barely sleeps. She searches again the next morning and then finds Arobynn in her apartment. He tells her Sam is dead.

She is numb with grief and wants to see Sam’s body. Arobynn refuses, but she leaves to do just that. Arobynn leads her to Sam when they arrive at The Keep. She doesn’t believe it until she sees him, and then it’s overwhelming. And she won’t leave.

Celaena wakes up in her old bed. She hears Arobynn discussing retaliation in the hall outside her room. She wants to go but finds that Arobynn has locked her in this room. She escapes through the window.

Celaena breaks into Jayne’s house. She easily takes down Jayne and his guards. As she makes her way to Farran, a strange smoke enters the room. It paralyzes her, and she passes out. She knows someone at the Keep betrayed her. Farran will turn Celaena over to the king in exchange for his approval as the new Crime Lord.

Celaena is brought before the king and other officials for a private trial. She won’t utter one word until he’s ready to announce the sentence. She asks him to make it quick, and he decides to give her nine life sentences at the salt mines of Endovier instead of death.

Arobynn and his secret ally Farran are watching as Celaena’s wagon rolls away. They conspired together to kill Sam and Jayne. Farran asks why Arobynn did this to Celaena, and he says because he doesn’t like to share his belongings.

Celaena is worried because she knows Endovier is a death camp. On the journey there, Celaena spots a rare White Stag, a symbol from her long lost kingdom of Terrasen. This restores a little hope. She’s ready to face and conquer Endovier.

There you go! That’s what happened in The Assassin’s Blade, the five novellas that serve as prequels to the Throne of Glass series.

Ready to buy the other Throne of Glass Books? Click to buy and help us pay for hosting!