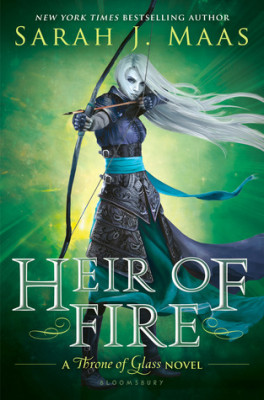 I have really enjoyed this series, and this installment adds a lot to the mythology of this fantasy world! Get caught up on what happened in Heir of Fire. We’ve got your spoilers here so you’ll be ready when the next book comes out!

Ratings
4.7 stars on Amazon
4.6 stars on Goodreads
Add Heir of Fire at Goodreads

Point of View
The book is written in third person from a variety of points of view, including Celaena (predominantly), Chaol, Dorian, and a few others.

Setting
This book is set in the fictional lands of Adarlan and Wendlyn.

– Celaena Sardothien – a former assassin who now serves as the King’s Champion; she really is Aelin Galathynius, the long lost princess of Terrasen.

– Dorian Havilliard – the crown prince who has discovered that he has magical powers even though his evil father (the king) has banished magic.

– Rowan – a centuries old mighty Fae soldier who is magically tied to Queen Maeve to do her will and who is assigned to train Celaena.

– Queen Maeve – Celaena’s aunt who is the ruthless leader of the Fae.

– Aedion Ashryver – a successful general in the king’s army who is Aelin’s cousin; they grew up side by side as close friends; he still thinks she is dead.

– Sorscha – a castle healer who has helped Dorian and his friends recover from their various injuries in books 2 and 3.

– Manon Blackbeak – a witch from one of the three Iron Teeth clans; she is heir to the High Witch.

What happens in Heir of Fire?

Celaena has been drinking, gambling, and fighting since arriving in Wendlyn. Rowan finds her and brings her to Queen Maeve. Celaena is glad because she wants answers from her aunt about the Wyrdkeys. The queen says she will give Celaena answers. But first the queen wants to see what has become of Celaena’s fire magic, the great, uncontrollable power that left her when the king banned magic in Erilea. Celaena cannot travel to Doranelle for the answers she desires until Rowan decides she has re-mastered her gifts.

The lessons with Rowan are impossibly hard, and he is harsh and brutal with Celaena. He continually asks her to shift into her Fae form and then to summon her fire magic. She works hard trying to call her abilities in any way he requests, but at first it’s to no avail.

In Adarlan, Aedion has arrived back from battle. When Chaol learns that Aedion is secretly loyal to Terrasen, Chaol tells him that Celaena/Aelin is still alive. These two, along with grandfather/grandson Murtaugh and Ren, begin working together. Murtaugh thinks he figured out how the king did away with magic. He thinks it’s a triangulated spell between towers in Rifthold, the Frozen Wastes, and the Deserted Peninsula. Chaol and Dorian think this knowledge can be used to free magic once again. Murtaugh also figures out that the king is manufacturing monsters on a deserted island to launch a surprise attack on Wendlyn.

Meanwhile, Dorian is exploring his powers with the help of Sorscha, a royal nurse who he is falling for. They find a way to help Dorian control his magic by increasing his intake of iron, a known deterrent to his type of powers.

Also, three witch clans are introduced. They are bitter rivals and have come together for the king of Adarlan. They compete for leadership of the group once they’re joined as one to go to battle for him. They are each allowed to pick one wyvern (a dragon-like creature) to train with. The main witch we learn about is Manon Blackbeak. She chooses an unlikely mount, Abraxos, a small but cunning creature. At first Manon doesn’t seem to have a conscience at all, but in the final battle she saves one of her rivals and emerges as the leader of the combined clans.

After a long while, Celaena’s training begins to pay off. She can voluntarily change back and forth between her human and Fae forms and can also summon her fire magic impressively. Also, a strong bond has slowly formed between her and Rowan. It appears to be platonic as Chaol is still on Celaena’s mind often and Rowan is still mourning his wife, who was killed over 200 years ago.

Celaena and Rowan have also been investigating the strange, brutal murders of Demi-Fae going on in their area. They discover the murderers are creatures from another world, called the Valg, a demon race who forged the Wyrdkeys long ago.

Rowan and Celaena know the Valg soldiers will be headed to their fortress home soon. They start assembling the civilians there to fight, but the attack happens sooner and stealthier than they anticipated. Celaena saves them by switching to her Fae form and calling on the strongest ever display of her magic. When her strength is failing her momentarily in this battle, Rowan joins them as carranam. This restores her strength as she draws on his power through the link.

Rowan and Celaena travel to Doranelle to meet with Queen Maeve, who holds up her end of the deal. She tells Celaena the Wyrdkeys can’t be destroyed; they can only be put back in the Wyrdgates. No one knows exactly how to do this. She says the king would possess incredible power if he had all three keys. The queen suspects Celaena has figured out where the third key is and begins whipping Rowan when she won’t share the secret. Celaena shows her magic and threatens to set the city on fire if Maeve doesn’t stop the torture. The queen sees her mighty power and stops.

Celaena has figured out that Maeve wanted the Wyrdkeys for centuries and that she betrayed those she loved to try to get them. Then Celaena pulls out the ring she found…from the man Maeve loved and betrayed so long ago. Celaena uses the ring to bargain with Maeve and get Rowan out of his blood oath to her. He then swears an oath to Celaena, and the two leave together.

How did Heir of Fire end?

Murtaugh arrives in Adarlan with the news that Aelin is alive and showed her true self in the battle in Wendlyn. Everyone is excited with the news. He leaves to go to Terrsaen to let her people and other realms along the way know. The king of Adarlan is in an absolute rage about the news.

The king summons Dorian, Sorscha, Chaol, and Aedion into his throne room to question them about a spy in their midst. Aedion tries to be the scapegoat. They shackle him and drag him off to the dungeons. The king says he’ll be executed soon.

The king turns to Sorscha and questions her about the letters she’s sent her friend with information about him. She admits it’s true but says she truly fell in love with Dorian. The king has her executed in front of them. Chaol draws his sword. A crossbow is shot at him, and Dorian freezes the room with his ice powers. The king is happy to witness his son’s magic. Thanks to Dorian, Chaol escapes. The king binds Dorian and places a black yoke on his neck. It appears he will now be under his father’s control.

Chaol grabs Fleetfoot and makes a run for the secret passages to escape. He tells Mort the doorknocker where he’s going in case Celaena shows up there. He makes it back to Ren, who vows to free Aedion.

Celaena sets off on a ship to Adarlan to tie up loose ends with Chaol for good and then find her old master Arobyn, who she believes has the third Wyrdkey. She wants to go alone. Rowan doesn’t like it but has to agree because of the blood oath. Celaena plans on gathering a court and an army to go up against the king. She says she will send for Rowan “when the time is right.” She’s ready to fight her way back to the throne in Terrasen.

There you go! That’s what happened in Heir of Fire, the third book in the Throne of Glass series.

Ready to buy Queen of Shadows, Empire of Storms or Chaol’s Story, Tower of Dawn or Throne of Glass #7? Click to buy and help us pay for hosting!

8 thoughts on “What happened in Heir of Fire? (Throne of Glass #3)”