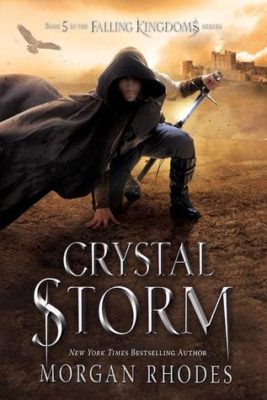 Read a full summary of Crystal Storm by Morgan Rhodes now!  This page is full of spoilers so beware. If you are wondering what happened in Crystal Storm the 5th book in the Falling Kingdoms series, then you are in the right place!

What happened in Crystal Storm?

Seventeen years ago, King Gaius took a potion from his mother, Selia, a witch, that would cause him to be unfeeling toward Elena Corso the love of his life (aka Cleo’s mom). He did forget her and his desire for power took its place.

Jonas finds that Prince Asher Cortas is not dead as he joins them on their voyage home from Kraeshia. He is brother to Amara Cortes who recently made herself empress after massacring their whole family.

Cleo and Magnus are appalled to find that king Gaius, who should be dying after a fall from a cliff, is in fact returning to health. He says he will fully die in time but for now he seems to want to help Magnus. He points Magnus toward his long lost witch of a grandmother, Selia. Gaius will also help search for Lucia, who they believe is the key to getting rid of Amara.

I give it 4 stars overall.
Lets be friends on Goodreads:

Gaius returns to his new wife Amara and makes her believe that he is searching for Magnus. She doesn’t believe him and has him followed. Amara learns that her soldiers are not loyal to her bc she is a woman. She claims she will give the throne to Asher upon his return. (Of course she believes that he is dead).  Magnus and Cleo meet up with king Gaius to go to grandma Selia to try to find Lucia.

Lucia is in the crystal city of the Watchers. She seeks Timotheus. She finds him and he makes known to all that she is the sorceress reborn. They bow to her. She is pregnant with a Watcher’s baby.

Jonas and Felix, still on a ship to Mytica, fight over who loved Lys and who let her die. Jonas’s fists begin to glow and he flings Felix across the deck. He retreats to his room and finds the mark of a Watcher on his chest, of air magic. Olivia, a Watcher, is stunned and tells him she is sorry as he passes out.

Timotheus says that the lands around the sanctuary are dying. Lucia is determined to trap the fire god, Kyan again and bring them all here.

When Magnus and his ground finally meet Selia, they find that her magic has faded so they must retrieve a bloodstone, which once belonged to the immortals themselves and will restore her. Selia agrees to help Gaius, who’s health is deteriorating quickly, as well as to find Lucia and lift Cleo’s curse (that she will die in child birth).  Magnus determines that he might like to have this object for himself.

Amara tries to learn the secrets of the Kindred from Nerissa, Cleo’s former maid. When left alone Kyan, the fire Kindred visits her and promises power if Amara will help him. They are going to Paelsia. They will go to try to remake his form that Lucia destroyed.

Timotheus tells Lucia that her world and the Sanctuary are two of seven worlds and Damon travels between them draining their power. Lucia returns to Mytica only to find it occupied by Amara’s Kracian soldiers. She also discovers that the baby in her belly has grown exponentially.

Jonas wakes and learns that because he was healed by two different Watchers at the brink of death, he has absorbed some of their elementia magic. He is disappointed though that he is only a vessel and cannot wield it at will.

Cleo, Magnus, Gaius and his mother travel to Basilia and request help in finding the bloodstone. Coincidentally they run into Jonas and his crew. They agree to a temporary alliance until Amara is removed from power.

Tensions are high at the Inn where they all stay, not helped by the fact that Magnus is unsure where Cleo’s loyalties lay. They send spies to learn what Amara might be doing in the area when they learn she is there.

They discover that Asher is missing and the earth and air Kindreds are missing.  They already know that Amara has the water Kindred.  What they don’t know is that Kyan the fire kindred is also with her, leading her.  Nic is sent to recover them from Asher before he can give them to his sister.

Amara addresses the people and Felix tries to kill her when other rebels create a distraction. He is detained instead. Nic is stabbed but Lucia heals him. Jonas then saves Lucia from the angry mob that calls for her death. He takes her to his sister because she is having birth pains. Jonas finds that his sister pretty much hates him after his long absence and everything that has happened.

Jonas dreams of Timotheus and the immortal tells him that Lucia will die in child birth and that the fate of the worlds now rests in his hands as he raises her son.

Olivia tells Cleo that Nic is dead and that she must stop watching over Jonas. Cleo is distraught and blames Magnus, pushing him further away.

Magnus and his grandmother meet with the man who carries the bloodstone. His grandmother kills the man. They use the stone to heal Gaius.

The next day grandma Selia tries to poison Cleo but Gaius stops her and sends her away. To Cleo’s surprise, he also sends Cleo away. When Magnus wakes to discover this he storms out only to find that Amara’s army has found them.

Lucia and Jonas return to the Inn to find that Magnus and Gaius are gone.  Kyan finds her and tells her that she no longer needs her.  She tries to trap him in his orb but fails.  He lures them to Amara.

How does Crystal Storm end?

Cleo visits Amara to try to get in her good graces and align herself with someone powerful.  Asher shows up but they lie to the guards and have him thrown in the pit where all of the other rebels are held.  Magnus and Gaius are brought in but Narissa and Nic save Magnus and together they go to find the air Kindred.  They are caught and all but Magnus are taken to the pit as well.

Kyan returns to Amara with “the storm”.  Selia arrives with her full witch’s power.  She also brings with her the watcher Olivia who is bound to her by magical marks.  It was Selia that had stolen the other Kindred.  They are now all gathered together before the pit.  Selia pushes Cleo and Amara in.

Lucia has her baby, and though Timotheus said she would die in child birth.  Jonas suggested that she drain his magic to save her own life and she did.

The ceremony to free the Kindred begins in the pit.  Kyan takes Nic’s body and the earth Kindred takes Olivia’s.  Then Gaius kills his mother and the ceremony cannot be completed.  The air and water kindred are free of their orbs but they cannot be bound without a witch.  The air Kindred enters Taran and the water Kindred enters Cleo though these two Kindreds cannot take over their bodies.  Kyan and Olivia, now controlled by the Kindred within them, leave and promises to return and help their brethren.

Kurtis, the Lumerian kingsliege, has kidnapped Magnus and strung him up in a dungeon.  After torture, Magnus wakes as he is being nailed into a box and buried alive.

There you go! That’s what happened in Crystal Storm. Hope your enjoyed this recap of Crystal Storm with spoilers.

Ready to read Immortal Reign, book #6 in the Falling Kingdoms series?  Click to buy and help us pay for hosting!