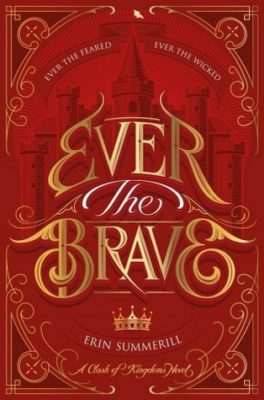 This recap is going to be a little different. Ever the Brave is the second of three books but is the final book featuring Britta and Cohen as main characters. Erin Summerill says the third book, Once a King, will focus on two characters who were previously in supporting roles: Aodren and Lirra. So I’m only going to summarize Aodren’s and Lirra’s development and storylines from Ever the Brave in this recap. This page is full of spoilers, so beware! If you want a refresher on what happened in Ever the Brave, then you are in the right place!

Ratings
4.6 stars on Amazon
3.87 stars on Goodreads
Add Ever the Brave at Goodreads.

What happens in Ever the Brave?

Aodren’s link with Britta, forged when she healed him at the end of book 1, is strong. He visits her several times. He brings her dresses and asks her to choose one for the upcoming ball. He’ll announce her as a member of the nobility then.

Aodren’s guards are killed, and he’s injured on his trip home from this particular visit. Britta saves him, hauls him onto her horse, and brings him to the castle. He’s very grateful and calls her into his office for a private chat. He talks of their magical bond for the first time and asks how long it will last. Next he tells her he heard that Phelia is her mother even in his semi-conscious state from his injury. He asks Britta to either stay at the castle or let two of his guards accompany her home. She rejects both offers. Aodren tells her she’s one of the only people he fully trusts. Aodren thinks about how he feels about Britta and how he wants to be a better man and king than his father.

Leif arrives at the castle carrying an injured girl. She has a mark on her arm, a rune Chanelers used to use to enhance their magical powers. Hagan (the healer) pulls Aodren aside to tell him about how Chaneler girls are being kidnapped in Shaerdan and how he thinks it might be girls like this one. Hagan tells Aodren he can also tell magic was used to heal the wound in his neck.

Aodren can feel Britta’s nearby presence and asks Omar about it. He’s disappointed to see her leaving town with Cohen and Lirra. He thinks about how everyone would leer at his interest in her. He considers what gift he could possibly give her to finally impress her. Omar reports what Cohen told him: Conklin and possibly other Malam lords are involved in the kidnappings in Shaerdan. Cohen was only able to rescue one girl. Aodren fears if this information gets out, his nation will be divided.

Aodren speaks up in the meeting, forming the search party after Lord Jamis’s escape from prison. Cohen doesn’t want Britta to go, but Aodren says it should be her choice whether she accompanies them. He’s disappointed to see Britta didn’t wear any of the dresses he gave her to the ball. He makes a toast to her late father to launch the festivities. Then half the crowd falls dead from poisoned drinks.

Aodren and Britta sneak out and try to form a plan. She realizes Finn is still in the castle and has to go get him since Cohen is gone. So they divide up. Aodren kisses her before they separate. He takes a secret passageway he used to use as a child to make his way through the castle in hopes of helping. It’s where the human waste is dumped, and he ends up dirty and smelling atrocious.

Aodren eventually makes his way to the dungeon. Phelia is down there, but he and Britta disable her, put her to sleep, and escape with Finn and Gillian (Britta’s lady’s maid). They get the two to Hagan’s house so he can work on Gillian, who had been captured and beaten. Finn will stay behind to take care of Gillian.

Aodren and Britta take what supplies Hagan can offer and leave. Aodren’s clothes end up soaked, and he gets dangerously cold and delirious. Britta strips off his clothes and uses her body heat to warm him two nights in a row. He tries to be a gentleman even though he has feelings for her. Britta’s confused about her feelings for two men, the king and Cohen. Cohen finds them the morning after their second night together and is furious and jealous.

They don’t gain the support of the Channeler’s Guild and take out on their own to battle their way home. A possessed Finn attacks Aodren with a knife. Phelia, Jamis, and the girls they’ve possessed are both there and attacking. Britta is stabbed. Aodren kills Jamis. Cohen kills Phelia. Aodren attempts to heal Britta through their connection since none of the Channelers can do it. It doesn’t seem like it’s going to work. Aodren is exhausted from trying, but it ends up hastening her healing. It breaks the magical bond between them.

Aodren, Cohen, and the other men leave to fight for Malam. They retake the royal city and the castle. When Aodren goes to visit Britta while she’s healing, she tells him she’s in love with Cohen. The two of them will only ever be friends. He seems to accept this (even though this chapter isn’t from his POV and we never hear his thoughts about it).

Aodren issues a decree ceasing the magical purge and allowing all Channelers to live in Malam without fear. He brings some from the Channeler’s Guild into his inner circle of advisors.

Back at the beginning of the book again, Lirra makes a deal with Cohen and Finn. She’ll take them to Phelia if they’ll sneak her into Malam so she can find her friend Orli, one of the Channeler girls recently kidnapped. At one bar, Lirra and Cohen have to act like newlyweds traveling on their honeymoon to not raise suspicion and to get the info they need. They kiss to emphasize their point.

Lirra is great at undercover work in cities but isn’t good at tracking quietly through the forest. The trio finally makes it to the camp where Conklin and the bad guys are holding the young girls they kidnapped.

Cohen gets word about the attack on the king and rushes back to Malam with Finn and Lirra. Lirra stays in Cohen’s guard quarters to listen for palace gossip while he goes to check on Britta. When Cohen and Britta make it into town to see her, Lirra shares what she discovered. The girl brought to the castle was sucked dry of her Channeler magic by a Spiriter and passed away despite every effort to save her.

Cohen takes Lirra to Britta’s house to stay indefinitely. When they’re alone, Britta asks Lirra about how the Spiriter could’ve killed Aodren’s guards without touching them. Lirra’s confused because—despite her knowledge of magic after working at a Shaerdanian Channeler school—she finds this very uncommon. Britta tells her the truth about Phelia, that she is her mother. Lirra is shocked. They try to determine how Phelia is taking the magic from unwilling Channelers and decide it must be a rune they’re not familiar with. Lirra demonstrates her air Channeler abilities to Britta.

After Britta and Gillian leave for the ball, Lirra sneaks to the castle. She sees Cohen leave with a contingent of men to track Jamis and follows them, hoping to meet up soon. She sees Omar’s injury and suspects foul play. So she just hangs back and watches. Lirra sees a traitor push Cohen over a cliff and uses her air Channeler abilities to rescue him by softening his fall.

Lirra takes Cohen to a secret hideout after the men have left to attempt to nurse him back to health. Her aunt arrives. Her aunt heads up the Malam underground Channeler Guild. The Guild is going to meet to see what they can do to help the kingdom. They help heal Omar, one of the men who was travelling with Cohen, but aren’t willing to join with Malam in the war.

Lirra and Cohen meet back up with Britta and Aodren. Lirra finally finds her friend Orli. Phelia is using her in a spell circle with three other girls. Their wrists are bound, and runes are drawn on their skin. Phelia is drawing energy from them to possess Finn to attack Aodren. Once the conflict and battle is over and Aodren has retaken his kingdom, Lirra helps return all the kidnapped Channeler girls to their homes.

There you go! That’s what happened with Aodren and Lirra in Ever the Brave, the second book in the Clash of Kingdoms series!

Ready to pre-order Once a King? Click to buy and help us pay for hosting!