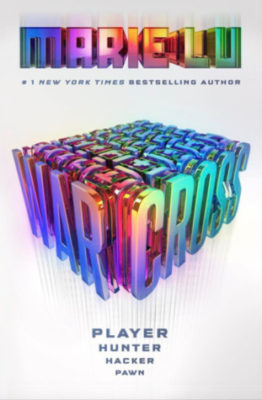 Read a full summary of Warcross by Marie Lu now!  This page is full of spoilers so beware. If you are looking for a spoiler-free review, check out our Rapid Review of Warcross.  If you are wondering what happened in Warcross, then you are in the right place!

What happened in Warcross?

Emika is a part-time waitress and bounty hunter.  She is only two days away from being evicted from her apartment.  She has been an orphan for many years and even ran away from a group home.

Her idol is Hideo Tanaka who invented Warcross, a virtual reality game that uses NeuroLink glasses to create a very lifelike experience. The glasses have become widespread over the years and are used not only for Warcross but also for everyday use and as a communication device.  Hideo’s success at a young age spurred her on to learn everything she could about coding and Warcross.

Emika’s money problems are making her desperate. During the opening game of the Warcross Championship, she uses a computer hack that she created to break into the game and steal a very valuable power-up that she believes she might be able to sell on the black market.  She is successfully able to obtain the object, but her act exposes her identity.  Her face is splashed all over the world. They also take the power-up back.

The next day reporters are at her door, and none other than Hideo himself calls her up to ask her to make the trip to Tokyo to meet him in person. He has even paid off all of her debts.

Emika flies to Tokyo where the virtual reality glasses are mainstream. People are able to earn points for performing even daily household tasks.

During her meeting with Hideo, he asks her to enter the draft as a wildcard for the Warcross tournament.  Her real purpose will be to find and disable a hacker known as Zero.  Hideo believes that Zero is one of the contestants.  He will pay her 10,000,000 for catching him.

She is surprised that Hideo wants to use her for the games since she has a criminal record.  When in high school she hacked into the accounts of some people that were bullying another student and exposed all of their secrets.

To everyone’s surprise, Emika is the first draft pick for a team called The Phoenix Riders.  The leader of her team is Asher.  Emika will be the architect of their group.  The other team members are Hammie, Roshan, and DJ Ren.

Hideo announces that he is shipping his new Warcross lenses (like contact lenses) around the world for free.

As Emika trains with her team, she finds that she is very behind because she has always used a hacked account to play Warcross. She was never able to get past a level in the twenties.

In her spare time, she finds a way to hack into everyone’s personal accounts so that she can flag any suspicious activity.  She even accidentally hacks into Hideo’s account but doesn’t dig into it.  Emika finds that Ren is set to meet someone in the Dark World, a virtuality reality world where illegal deals are made that runs parallel to the Warcross world.

When she follows Ren into the Dark World, she sees Zero but can’t see his face or anything about him.  He wears black coated armor in the virtual world.  Ren and several others communicate with him through the gambling bids on the next Warcross game. She realizes that Zero has given them coordinates that are all over the world.

Emika starts to spend more time with Hideo, and he gives her a program that will allow her to take info from Ren during her team’s first match.

During this match, she not only gathers some information from Ren but she also helps her team win against a team called the Demon Brigade.  Using Hideo’s program, she grabs the name of a program from Ren, and it leads her to believe that they will be going after Hideo.  Just before the match is over, Emika sees Zero in the Warcross game, but no one else seemed to notice him.  When they are back in the real world, in the Tokyo arena, the power cuts off, and a shooter attempts to assassinate Hideo. One of his bodyguards is shot instead.

Emika visits Hideo afterward.  He lets her know how he feels about her but is worried about them having a relationship. He refuses to leave the city to protect himself.

They spend more time together, and Emika continues to train and get to know her teammates better.  Hammie knows that something is up with Emika.

Hideo takes her to see his family‘s home where his mother and father still live.  They are both in poor health.  He usually doesn’t talk about his family with anyone, but he tells Emika about his little brother, Sasuke Tanaka, who was kidnapped many years ago.  Hideo created the game in memory of him.

In the next battle against the Cloud Knights, Emika tries to follow Ren but he leads her into a trap where she is cornered by Zero who knows that she is onto him.  He makes her look very bad in the game–as if she gave up on her team. He tells her that she can either come join him or he will expose her.  She refuses.

After the game her teammates are livid, but she doesn’t know how to tell them about what happened without endangering them.  Zero visit her again and takes away her memories of her father.  He exposes her and Hideo’s relationship then blows up the building where she and her teammates live. The team is OK, but Ren is kicked off the team.  Hideo takes her off the team as well and tells her to leave.  He also still refuses to leave town.

How does Warcross end?

She tells her teammates what is going on and asks them to help. She will take on Zero anyway.  She doesn’t tell Hideo what she has planned.  She learns that another player named Tremaine from another team was also a bounty hunter for Hideo.

She has learned that something is going down in the final game when viewers around the world are at the highest.

She goes back to the Dark World where she bids on and wins two very powerful and very expensive power-ups.  She also steals one called Play God that will allow her to change anything in the game. Her three remaining teammates help her out when things go wrong in the Dark World.

She breaks into the final game between the Phoenixes and Andromeda by taking over the avatar of her replacement recruit.  She successfully wins the game and stops Zero.  But he calls her a fool.  His plan all along has been to stop Hideo.  She is confused and doesn’t know what this means.

Later Hideo tells her that his free NeuroLink lenses will use an algorithm to control people’s brains—even after they take them off.  When they are mad or display other negative emotions, it will calm them or even stop them from doing bad things.  It will almost completely eliminate crime.  She doesn’t agree with this and refuses to help him.  She swears she will stop him.  Unfortunately, she now wears part of his plan over her own eye.

She meets back up with her teammates as well as other professional Warcross players, and they discuss what to do next.  They discover from Emika’s memory files of the games that Zero’s identity was exposed briefly.  He is Sasuke, Hideo’s long-ago kidnapped brother.  Later Sasuke, not knowing that Emika knows his identity, tells her that his offer for her to join him still stands.

There you go! That’s what happened in Warcross. Hope you enjoyed this recap of Warcross with spoilers.

Ready to read or re-read Warcross or Wildcard? Click to buy and help us pay for hosting!

18 thoughts on “What happened in Warcross?”