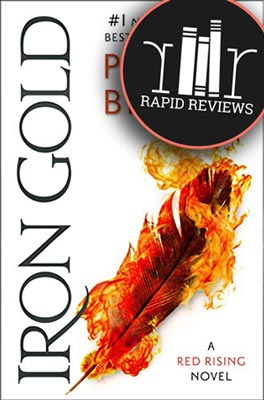 No spoilers in this review of Iron Gold by Pierce Brown. (There will, however, be spoilers for the first three books in the Red Rising Saga. So stop reading this review now if you haven’t read these books. And then go pick book one up immediately because this series is amazing!!!) 😉 I give Iron Gold a solid 5 stars! It was wonderful to be immersed in this world once again!

I loved the original trilogy. It was one of those rare series in which each book was better than the one before. I wondered if Brown could top book three in this saga, his original finale and my favorite. I should have never doubted him. While I also rated Morning Star five stars, I honestly think Iron Gold is even better.

It picks up ten years after Morning Star. Mustang is the Sovereign, and Darrow leads her military forces. Ruling is harder than the pair ever imagined, and in their own way they both still fight for the ideal society of which they have always dreamed. Yet they seem to have just traded old problems for new ones. Now Darrow and his team must embark on an impossible mission to attempt to conclude the endless war and finally begin to establish peace.

STACY’S BOOK RATING
I give it 5 stars overall.
Lets be friends on Goodreads:

Unlike the first trilogy, which is told entirely from Darrow’s perspective, Iron Gold is told from the point of view of three additional people: Lysander, Ephraim, and Lyria.

Lysander has been flying around the universe with Cassius after Darrow allowed them to flee at the end of Morning Star. He has two sets of ideals warring within him: those his grandmother (the former Sovereign) taught him as a child and those his new mentor Cassius has taught him these past ten years.

Ephraim is a former soldier turned career thief. His team has pulled off a number of big heists. And now they’ve been asked to undertake the biggest, most dangerous, and most lucrative heist yet.

Finally, Lyria is a Red living in the new world Mustang and Darrow have built. But things aren’t going as planned, and the conditions in which Lyria lives are even worse than those in which Darrow grew up. Lyria is soon given an opportunity to escape her home and see how those in other parts of the universe live.

Each of the four characters’ perspectives weave together to form the tapestry that is their kingdom. Their universe. It was enlightening to see how the other three perceive Darrow’s actions and motives from afar. Since we also get to hear Darrow’s thoughts, it was an interesting case study on how leaders are often misunderstood by those they lead.

What else can I say about Iron Gold? It was epic. Powerful. Action-packed. Emotional. Twisty. Both the hand-on-hand combat scenes and the big battles were incredible. So many passages resonated with me, with powerful, insightful proclamations that gave me pause. The characters hit every emotional button, both the old favorites and the new characters alike. And the plot surprised me again and again, yet every twist was logical when I looked back on it.

Pierce Brown’s writing was magnificent in the first trilogy, and I could immediately tell that he has grown even more as a writer. He’s very descriptive about how the world he built and the characters he created look and act. But the immersive descriptions were never overbearing. They hit exactly the right note each time to build a perfect picture of each scene in my mind. And as I read, I kept wondering: How does Brown have this much wisdom about human nature at 29?

I doubt any book I read this year will top Iron Gold. It is a treasure, and Brown is the best of the best of current writers. So I definitely recommend it! One caution: It is not for young readers. While the Red Rising Saga is not YA, it has been embraced by many YA readers because Darrow started out as a teenager in Red Rising. But the heavy subject matter, violence, and language are absolutely not meant for the younger end of the YA audience.

This book definitely felt like part one of two, and I have MANY questions that need answered in the Red Rising Saga finale, Dark Age. Do we really get it on September 11th of this year?! That seems too good to be true!

One last thing…I want to put a plug for the audiobook here, too. I LOVE Tim Gerard Reynolds, the man who read the original three books. He continues to narrate Darrow’s chapters in Iron Gold, but there are three additional readers for the other points of view. While Reynolds is my favorite of the four, the others do a great job as well!

Let us know what you think about Iron Gold in the comments! No spoilers on this page please. 🙂

Ready to read Iron Gold? Click to buy and help us pay for hosting.