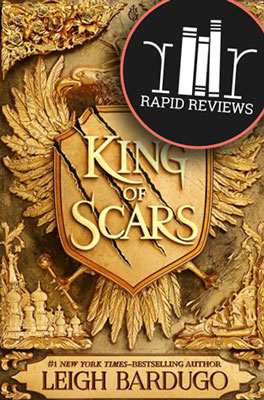 No spoilers in this review of King of Scars by Leigh Bardugo. (There will be spoilers, however, for those who haven’t read the Shadow and Bone trilogy.) I liked it and give it 3.5 stars. Hopefully this book isn’t suffering too much from my sky-high expectations for anything Bardugo writes. I fell in love with her writing style and the Grisha world in Six of Crows, which is one of my all-time favorite books. Everything about the writing and characters in that duology is perfection.

I also enjoyed Bardugo’s Shadow and Bone trilogy (her first series), although I didn’t like it as well as the Six of Crows duology. Each book in the trilogy was a 4-star read for me. But I figured this was because Bardugo had grown as a writer since her first series. Needless to say, I was expecting a lot out of King of Scars, and she didn’t quite deliver like I’d hoped.

The book follows Nikolai Lantsov, one of the secondary characters from the Shadow and Bone books. He was my favorite in that series, so much so that I shrieked when I read his interaction with Kaz in Crooked Kingdom. He’s arrogant and sarcastic (in a fun way) but still honorable and strong at the same time.

In King, Nikolai is ruling Ravka as best he can, but after years of war on various fronts, the country is not as strong as it needs to be. Nikolai is expecting an attack from their enemies any day and is trying to find the most promising allies to aid Ravka when the inevitable happens. This isn’t his only problem, though; Nikolai is fighting demons within as well.

Other Grisha favorites are in King, too, including Nina, Zoya, and Genya, among others. Nikolai’s crew is scrambling for new ideas on how to protect Ravka. One of their most promising prospects is to form an alliance with a powerful country through marriage. Nikolai needs to meet and court one of the nearby princesses. And, as much as she tells herself she’s indifferent, at least one lady in Nikolai’s group of advisors is unhappy about the prospect of him getting married. Nina, on the other hand, is on a mission of her own, one that involves the dangerous drug jurda parem once again.

Nikolai’s interactions and banter with the headstrong Zoya were my favorite. That girl can dish it out, for sure! It was fun to see so many other characters I’ve grown to know and love, but I didn’t get to see everyone from Six of Crows. I realize they’re characters from a crossover series, but I still hope they’ll make in appearance in book 2.

King was well-written—I seriously love Bardugo’s prose—but the plot wasn’t all I’d hoped for. There were aspects of it I enjoyed, and I was dealt a couple of fun surprises at the end. But I felt like parts of the storyline were recycled from the Shadow and Bone series, and I was hoping for something completely new. I can’t say anything else about this issue (which is my main complaint) without spoilers, so I’ll leave it at that.

If I had picked this up as a brand new series with no ties to Bardugo’s past works, how would I rate it? I guess it’s impossible to say for sure, but I think I might’ve given it 4 stars when I stack it up against the current YA high fantasy out there. Bardugo is still easily one of the best. This was one of my most anticipated books of 2019, though. My expectations were very high, and honestly, King of Scars didn’t fully deliver.

But I still recommend this series to high fantasy fans. I will definitely be back for the next installment! I like the set-up after the climax, and I think book 2 will be better. (And maybe, just maybe Kaz will make an appearance. A girl can hope, right?) 😉

Ready to read King of Scars? Click to buy and help us pay for hosting.

Let us know what you think about King of Scars in the comments! No spoilers on this page please!