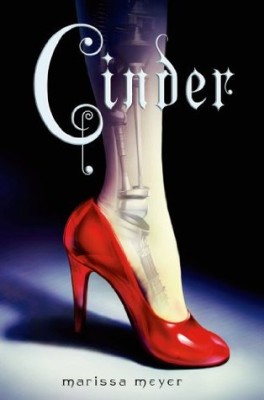 I love a book based on a story I already know! Cinder VERY loosely follows the fairy tale Cinderella. This book with the others in The Lunar Chronicles Series makes it fun to watch all the pieces come together as the fairy tale characters are woven throughout this futuristic dystopian fantasy! It is hard to explain to others. It goes something like this: “It’s based on Cinderella, there are robots and cyborgs, space travel, deadly disease, people live on the moon, oh never mind, trust me just read it!” Want to know what happened in Cinder? Read below for all the spoilers.

Main Characters & Other info
Cinder – a cyborg who is a very talented mechanic and lives with her not-so-nice stepmother
Cyborg – A human who has been surgically repaired in some way using robotics. Cinder has a mechanical hand and foot as well as other less apparent additions like a computer in her brain. Cyborgs are seen as second-class citizens.
Prince Kaito (Kai) – heir to the throne of New Beijing whose father is dying
Iko – Cinder’s android and friend who is very human-like due to a personality chip “malfunction”.
Adri – Cinder’s horrible stepmother who hates that Cinder is a cyborg and treats her very poorly because of it.
Peony – Cinder’s step-sister and friend
Luna – Colony living on the moon. Over time many of the Lunars have developed mind control abilities, including the queen. They are able to change the way they appear to other people.
Queen Levana – cruel leader of Luna who seeks an alliance with Earth by marrying Prince Kai. She always covers her face when performing video communications so that no one knows what she really looks like. She can also bend others to her will making her very powerful. More about her in Fairest…
Letumosis – deadly disease that is spreading throughout the Earthen population
Setting – Futuristic New Beijing

What happens in Cinder?

Cinder, a cyborg girl living in New Beijing with her cruel stepmother, meets the famous Prince Kai when she is asked by him to fix his broken android. She is able to hide the fact that she is cyborg from him.

Cinder’s step-sister, Peony contracts a deadly disease called Letumosis and is taken away to a quarantine facility. Cinder’s horrible stepmother blames Cinder and cruelly “volunteers” her for Letumosis testing. During the testing however it is found that Cinder is immune to the disease and agrees to help the researcher, Dr. Erland so that maybe they will find a cure for Peony.

Kai is worried about his father who is suffering from Letumosis as well as the Lunar Queen Levana who wants to form an alliance by marrying him. Kai’s father soon dies from Letumosis leaving Kai the new king.

Queen Levana then pays a visit to Earth and becomes a guest in Kai’s castle.

When Cinder is finally able to fix Kai’s android she finds that he is searching for the lost Princess Selene of Luna. If he finds and reinstates her, then he will not be forced to marry the evil queen. Princess Selene was presumed dead but there is a rumor that she may have been smuggled to earth many years ago.

When Cinder takes the repaired android back to Kai, she is spotted by Levana. Levana is livid and claims that they are harboring a Lunar fugitive. Doctor Erland does confirm that Cinder is Lunar and that he is as well.

There is going to be a ball held at the castle and Kai asks Cinder to be her guest but she says no, afraid he will find out about her.

Levana brings an antidote to Letumosis with her to Earth and Cinder tries to save Peony but is too late. She dies but Cinder is able to save another boy confirming that the antidote does work.

Cinder’s stepmother Adri destroys Cinder’s android and friend in a fit of rage but Cinder is able to save the android’s personality chip.

On the night of the ball Cinder is planning to escape but she finds out that the Lunar queen is planning to marry Kai and then kill him so that she may rule. She goes to the ball to warn Kai.

How did Cinder end?

Cinder shows up drenched and dirty at the ball but she and Kai are able the share a dance anyway. Levana shows up and makes a scene. She very nearly forces Cinder to shoot herself using her mind control power but Cinder is able to fight it and makes a run for it out of the castle. But on her way down the steps, she loses her cyborg foot and is arrested. Kai now knows that she is both cyborg and Lunar.

While in prison Dr. Erland visits and lets her know that the secrets don’t end there. She is also Princess Selene, and will now be hunted by Queen Levana who knows her true identity (though no one else does). He warns Cinder that she must find a way to escape.

There you have it. That’s what happened in Cinder, the first book in the Lunar Chronicles!

40 thoughts on “What happened in Cinder? (The Lunar Chronicles #1)”