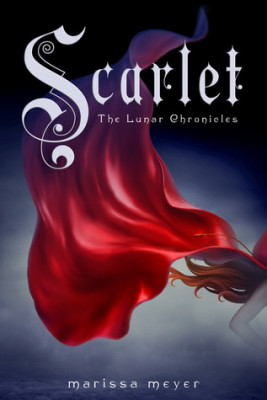 Scarlet, very loosely based on Little Red Riding Hood, was an awesome read that incorporates fairytale characters in a futuristic dystopian fantasy! It follows Scarlet’s adventures as well as continues Cinder’s story that was started in book one of the Lunar Chronicles. Want to know what happened in Scarlet? Read below for all the spoilers.

Scarlet – granddaughter of the space pilot who brought Princess Selene to Earth many years ago.
Wolf (Ze’ev Kesley) – A genetically modified Lunar super soldier trained for war with Earth
Cinder – cyborg and Lunar girl searching for answers about who she is
Kai – young ruler of New Beijing
Iko – Cinder’s android and friend
Carswell – famous outlaw that escapes with Cinder from New Beijing prison
Queen Lavana – evil ruler of Luna
Thaumaturge – powerful Lunars who work for Queen Levana. Some even lead and control “packs” like the one Wolf is a part of.
Setting – Futuristic France and New Beijing
More – Additional info in our What happens in Cinder post…

What happens in Scarlet?

Scarlet’s grandmother has been missing with no leads. Scarlet meets a street fighter who goes by the name Wolf that has been lurking around her small town in Europe. Scarlet notices a strange tattoo of numbers on his arm. Later Scarlet finds her estranged father frantically looking for something in her grandmother’s house. Scarlet finds out from him that he had been being held captive by the same people that have her grandmother. And his captors have the same tattoo that Wolf has. Scarlet confronts Wolf and he denies having anything to do with her grandmother’s capture. He agrees to help her find and rescue her grandmother claiming that he used to be a part of their “pack”.  As they travel to Paris together sparks fly but then another member of the pack named Ran shows up and eventually Scarlet finds out that both Ran and Wolf were sent to capture her grandmother. Wolf had only recently left the pack. When they reach the rest of the pack in Paris Wolf is welcomed back into their group and Scarlet is locked up with her grandmother.

Meanwhile, Cinder escapes from New Beijing prison with Carswell Thorne, who happens to have a hidden ship in the city. Cinder puts Iko’s personality chip into the ship. They then follow clues about Cinder, herself (aka Princess Selene) that lead eventually to Scarlet’s grandmother’s farmhouse.  While there they find a secret bunker that seems to be where the princess may have been kept and made cyborg as a child. It’s rumored that Cinder/Princess Selene was burned very badly before leaving Luna. It turns out that Scarlet’s grandmother was the pilot that brought Cinder to Earth and took care of her for a time. This is why she is being held and questioned by Lunars. They head to Paris to find Scarlet and her grandmother.

While all of this is happening Kai tries to appear to help the Lunar Queen Levana find Cinder. But he secretly hopes that she is safe. Levana knows Cinder’s true identity but Kai still does not. The angry Levana then launches a worldwide attack on Earth using her Lunar super-soldier wolf packs. The packs are mind-controlled by Levana’s powerful Thaumaturges.

How did Scarlet end?

As the global attack is happening, Scarlet’s grandmother is killed but Scarlet is able to escape her prison with Wolf’s help. Cinder, Thorne, and Iko find them and after a lengthy battle are able to save both Wolf and Scarlet from a Thaumaturge. The group then flies away on Iko the spaceship. Back in New Beijing, Prince Kai blames himself for the Earthen attacks and finally agrees to marry Queen Lavana so that the violence will stop.

There you have it. That’s what happened in Scarlet, the second book in the Lunar Chronicles!

7 thoughts on “What happened in Scarlet? (The Lunar Chronicles #2)”