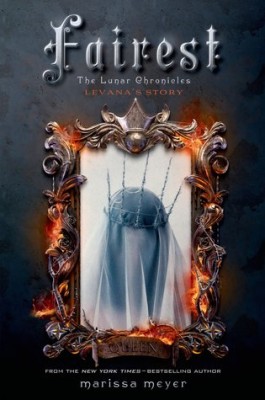 Fairest is a prequel to the events in the Lunar Chronicles series. It tells the story of Queen Levana: how she got where she is and how she became evil. There are moments when you feel sorry for her but when given a chance to redeem herself, she never does. This was a great (and essential) read for fans of the Lunar Chronicles but I can’t say that I loved it because I couldn’t connect with her character. She had no redeeming characteristics. But still…read it! Want to know what happened in Fairest? Read below for all the spoilers.

What happens in Fairest?

Levana and Channary (teenage sisters) are getting ready to attend their parent’s funeral who were killed by an intruder. Neither girl is sad to see their parents go and they hate each other as well. While Channary is naturally beautiful, Levana needs a constant glamour to maintain her perfection. Both girls seem to be ruthless and cunning.

At the funeral, Levana speaks with Sir Evret Hayle, one of the royal guards. Even though he is ten years older than Levana, she has a crush on him. She also meets his beautiful and very pregnant wife, Solstice. They seem very happy and Levana is immediately jealous. Later when Levana is testing a few glamours for the coronation she makes herself appear like Solstice. Unfortunately, Channary bursts in with Evret her guard and they see her. Levana is mortified.

A few weeks later it is Levana’s birthday but of course, Channary steals all of the attention, and Levana is all but forgotten. As Levana leaves her party Evret gives her a pendant with Earth on it as a birthday present. When alone she reads the note that says both Evret and Solstice send her best wishes. Levana rips up the part with Solstice’s name on it.

During this time Channary’s lab techs are able to complete their parent’s work of creating a deadly disease, called Letumosis. They are gathering Lunar shells by force for testing in an attempt to create an antidote.

The time comes for Solstice to have her baby. The baby, named Winter, is fine but Solstice dies. Evret is devastated but Levana sees this as her fated opportunity to be with him. When she tells him she loves him he quickly tells her that he sees her only as a friend. Levana even glamours herself to look like Solstice. She prevents him from resigning and begins manipulating his mind to make him kiss her and even think he loves her while he is with her. But deep down he knows what he is feeling is fake. Evret tries to get her to stop but Levana impulsively asks him to marry her. He has no choice but to say yes. Channary does not like the match but allows it. Evret refuses to stop being part of the Royal Guard.

Channary announces that she is pregnant. The baby will be Princess Selene and her father is unknown. After the baby is born, Channary contracts a disease in her lungs and dies. Levana is named Queen Regent until Princess Selene is old enough to be queen.

Over time Princess Selene and Princess Winter grow to be playmates and Levana proves herself to be a smart ruler and Luna begins to thrive. Soon she realizes that she will be a better queen than Selene and does not want to give up her throne in a few years. She begins plotting the three-year-old’s death. Levana arranges for a nanny and Selene to be alone with a candle in the nursery. Both perish in the resulting fire. But it is rumored that Princess Selene may have lived. Some doctors are questioned and some disappear but the final word is that she did have a heartbeat but died later.

Winter and Evret become friends with the Garrison family who has a young son named Jacin. Things aren’t great between Evret and Levana even though he often tries to make things better. Levana eventually shows Evret what she looks like under her glamour. He is horrified. She reveals that she was badly burned in a fire when she was younger. It was Channary’s doing.

How did Fairest end?

Later Levana decides that in order to get resources from Earth that they badly need, she will need to form an alliance through marriage to a ruler on Earth. Likely the heir to the Eastern Commonwealth (aka Prince Kai). She arranges for someone to murder Evret to leave her free to marry. His dying wish is for her to take care of Princess Winter.

There you have it. That’s what happened in Fairest!

36 thoughts on “What happened in Fairest? (The Lunar Chronicles #3.5)”